As the first of the year approaches, I thought I’d start a new post series talking about the books I’m most excited to be released each month. My plan is to do this for every month this year and hopefully have between 5-10 books to discuss for each.

This, of course, is in no way related to any insider publishing knowledge I possess (I have none), and I’m by no means pulling from an extensive list (I rely on Goodreads a lot for lists and information). So if you don’t see your fav listed here, it’s likely because I don’t know about it, so definitely drop me a comment! It may be right up my alley.

Without further ado, let’s get to it!

I have been psyched for The Cruel Prince by Holly Black ever since I read that sweet, sweet synopsis on Goodreads. Anticipation for this book is actually what got me to read Holly Black’s other faerie novels, which I really enjoyed. In this one, Jude is a human who was stolen away as a child to live in the High Court of Faerie. Now she’s desperate to belong there, but most fey hate humans, especially Prince Cardan, the High King’s youngest son. Jude has to defy him if she wants a place in the Court–but doing so means consequences, for both her and her two sisters.

This book seems to feature all the things I love: court politics, a gutsy heroine, familial loyalty and drama, treachery, rich world-building, and, of course, problematic Fey love interests. A friend of mine actually found an ARC of this, and her hints have been most promising. I cannot wait for the new year and to have this book in my hands!

So I was probably one of the few people who really enjoyed the film, In Time. The concept of time being used as currency, adding and subtracting to one’s own life, is both thrilling, interesting, and terrifying; the ultra-rich could live forever, but the poor… Not so much. (Also, Cillian Murphy and Justin Timberlake brought their A-game, and they weren’t appreciated enough, just saying.)

Everless by Sara Holland follows a similar premise. Once servants at Everless, a wealthy family’s estate, Jules Ember and her father were dismissed after an accident, and now Jules is desperate to save her father, who is quickly running out of time. Her journey takes her to the royal palace for work, but once she’s there, she begins to uncover certain secrets, about herself and the myths of her world, that she never expected.

At least, I think that’s what the synopsis is saying. It’s admittedly vague on what these secrets are supposed to be, but that’s where a lot of my intrigue is coming from, so I’m glad it’s not being too specific. I think I’ll really enjoy this book if the world-building and twists bring it as good as Cillian and Justin. And if it wants to launch into a philosophical discussion about time and class division/inequality, I’ll be happy, too.

The Hazel Wood by Melissa Albert seems to promise a spooky mystery. Alice and her mom have always been wanderers down on their luck, but when Alice’s grandmother dies alone at her estate, the Hazel Wood, Alice’s luck goes from bad to worse. Her mother is spirited away by a figure from the Hinterlands, a place that’s supposed to only exist in her grandmother’s cult-classic book of dark fairy tales. After her mother leaves behind a single clue–“Stay away from the Hazel Wood”–Alice is joined by Hinterland superfan Ellery Finch. Together, they must travel to the Hazel Wood and perhaps even the Hinterlands itself to save Alice’s mother and discover why bad luck has dogged her family for years.

This book gives me the same feeling that Over the Garden Wall gives me. Like something out of time, something that’s at once charming and unnerving, offering a sense of old tales that have been forgotten–but were never really known in the first place. I don’t know if the book will deliver that or something completely different, but I’m open to the story the author wants to show me.

First of all, that cover, wow, sleek! Rati Mehrotra doesn’t seem like she’s playing around with her debut novel, Markswoman. Judging by the synopsis alone, an incredible amount of work went into the world-building. “Kyra is the youngest Markswoman in the Order of Kali, a highly trained sisterhood of elite warriors armed with telepathic blades. ” Wow, I’m already sold!

But it goes deeper. Kyra is expected to give up her former life to serve her Order and protect the people of Asiana, but she secretly yearns to avenge her dead parents. However, she’s forced to abandon her Order when her mentor dies mysteriously and a new, dangerous Markswoman named Tamsyn assumes control of the Order. Fleeing to the wilderness, Kyra meets Rustan, a Marksman of Khur who isn’t too happy with his lot in life, either.

I have some intriguing questions with how this book is going to go. Why does Kyra run, and just how dangerous is Tamsyn? Will Kyra find out what really happened to her mentor? Is Tamsyn a well-written villain or a misunderstood saint? Will Kyra and Rustan work together, or will they actually have cross-purposes? There’s so many directions this book could go, and I’m excited to see what Rati Mehrotra chooses.

I won’t lie. I might have passed this book over completely if I hadn’t 1) stopped long enough to see what it was about and 2) if I hadn’t started watching Starz’ Spartacus on Netflix. I’ve become a quick fan of the show, so Blood and Sand by C. V. Wyk is a well-timed find.

The book offers an alternate history of the legend of Spartacus. Attia, a future queen and sword maiden of Thrace, is now a slave in the Roman Empire. She’s awarded to Xanthus, the Champion of Rome, who was groomed as a gladiator since he was taken into slavery as a child. These two slaves form an alliance, determined to spark a rebellion against Rome and create the legend of Spartacus.

I really love seeing books written by two people, especially two friends. It usually means double the love and attention has been put into the story, and what’s not great about that?

Unearthed by Amie Kaufman and Meagan Spooner promises aliens as well as something with Tomb Raider/Indiana Jones flair. As Earth undergoes environmental damage, a message from a long-extinct alien race is intercepted that could prevent further disaster and turn everything around for Earth’s future.

But first, Jules Addison has to travel to the aliens’ former home planet of Gaia to study its secrets. Once there, he meets Amelia Radcliffe, a scavenger who seems determined to loot the whole place. Even though they are immediately at odds, the two are forced to make an alliance after a confrontation with other scavengers, and together they must breach the alien temple, avoid every trap, and uncover the aliens’ secrets, hopefully without triggering an end to all humanity in the process.

This book seems like it’s going to be a fun adventure ride from start to finish, with some delightful twists and combative characters to boot. 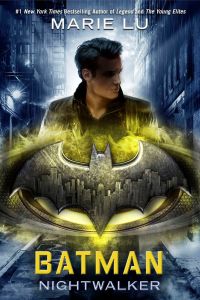 I’ve been looking forward to Marie Lu tackling a Batman story ever since I read Warcross. She seems capable of being able to write a setting like Gotham and a character as cool as Bruce Wayne.

Wonder Woman: Warbringer by Leigh Bardugo met my high expectations, and I’d be lying if I said my expectations for Batman: Nightwalker aren’t equally high. But the reason is different. I had high hopes for Bardugo’s novel because I know that woman can tell one hell of a story. I have high hopes for Marie Lu’s book, not because of Marie Lu, but because I am one hell of a Batman fan.

Here, Bruce Wayne is turning eighteen, set to inherit the Wayne legacy and fortune–not to mention all the neat toys in R&D. But first he has to pull a stint of community service at Arkham Asylum after a run-in with the police. There, he meets Madeleine Wallace, a brilliant killer, with ties to the Nightwalkers, a group who has been executing the city’s elite by trapping them in their homes and using their security systems against them. Madeleine may be the one person who can help Bruce figure out how to stop them, or she could be his greatest threat.

Since this is a pre-Batman story, everything hinges on how well Marie Lu writes Bruce and how she handles writing brand-new villains for an already villain-rich universe. Will I find them interesting, or will I be missing the Riddler, Scarecrow, Poison Ivy, and all the rest? Guess I’ll just have to wait until January to find out.

Hope you enjoyed the list! Are you hyped for any of these? Or is there another book you wish I’d listed here? Let me know in the comments!

3 thoughts on “Most Anticipated Releases – January 2018”