I received this ARC from NetGalley in exchange for an honest review.

I’m trying to understand the fascination behind this whole contemporary, free-style poetry thing.

Throughout high school and college, I developed a fondness for poetry, particularly the classic works of Shakespeare, John Donne, Emily Dickinson, Edgar Allen Poe, Maya Angelou, and Robert Frost. Once I was taught how to analyze poetry and understand what it was telling me, I learned to have a deep respect of poets in general because they accomplish such feats with words I don’t think I could ever manage myself. Rhyme scheme, meter, rhythm–the thought of trying to master all of this on top of language is daunting, but there are people who exist who accomplish it, and that is both stunning and humbling to me.

(That’s not even getting into those who can achieve epic poetry the likes of The Faerie Queen by Edmund Spenser. Those people are gods, and I live in fear and awe of them.)

Free verse poetry isn’t exactly new on the scene; even poets like Walt Whitman and Christina Rosetti composed some of their works in free verse, which possesses its own merits. But if Planting Gardens in Graves is any indication, I’m wondering what those merits are.

Let me make one final point before I delve into this book. Above all, poetry is deeply personal–for all of us. No two people are going to agree exactly on which poems they do or don’t like; everyone is going to feel differently and find different meanings about the words they read, and everyone is going to find themselves struck speechless by one poem, only to wonder what the big deal is about another.

In this latest volume, R. H. Sin is still writing the feminist poetry he is famous for, focusing on toxic relationships (mostly romantic ones) and imparting self-worth. Planting Gardens in Graves is actually my first volume of his I’ve ever read in full, but I decided to read it because I’ve seen some of his poems floating around the internet and I’ve liked them.

However, I’m thinking now I like them on an individual, case-by-case basis. Planting Gardens in Graves started out alright, but the more I read, the more I wondered what I was getting out of it. Most of the poems are so short–mere sentences, really–with no rhyme or meter, looking like it took maybe a minute or two tops to write each one.

I knew that was how it would be going in, so I already had some skepticism about whether or not this was “real” poetry. Ugh, that makes me sound like an elitist jerk, but I think you know what I mean. It’s hard to compare, say, “Do Not Go Gentle Into That Good Night” by Dylan Thomas to one of these mini poems of R. H. Sin’s and not have an obvious bias of which one took more time and effort and does more for you.

It wasn’t all bad, though. Many of Sin’s poems talked about the ins and outs of relationships. How people stay in them, knowing all they’re getting is pain, but the unknown of being alone is too scary to contemplate. How some people find the strength to leave for something better. How some people don’t, but it’s important to acknowledge their self-worth anyway.

Loneliness, heartache, frustration, hope, pain, healing, fatigue–I went through a whole spectrum of emotion when it came to romantic relationships and the sometimes bad ones we find ourselves in. Before long, however, they all began to repeat themselves and sounded exactly alike.

I wish there had been a little more variety of the kind of relationships Sin was talking about because there was so much of it I couldn’t relate to on a personal level. But I’m an anomaly on the whole romantic relationship thing, and I acknowledge that. I know there are many people who would resonate with these poems to the depths of their souls and find validation in them.

One poem I did like could apply to any kind of toxic relationship, even the platonic ones: 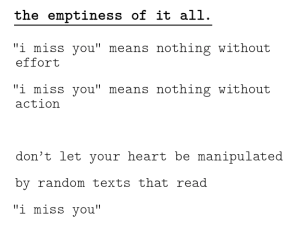 I think we’ve all gotten those texts from (ex)-friends and loved ones alike, sparking a bit of hope in us before we realize those relationships are never going to be what we want them to be. Those people aren’t going to put forth the effort we put into them, but their little reminders of what could be give them power over us until we recognize them for the lies they are.

Not that I’m speaking from experience or anything.

But all too often, I got a strange feeling. I know Sin is writing these poems to give back to the women in his life who inspired him through the years, and I want to take that at face value. Many times, though, I wondered. Why is he speaking for women so much? Why is he speaking to women so much, like he’s offering valuable insider knowledge on the male psyche and how men are going to treat women if women don’t guard against them? Sin, my guy…

It didn’t happen at first, but soon I started to get some “nice guy” vibes from some of his poems, and I really wasn’t here for it. The worst of it came from “Don’t Blame Yourself” where he laments how women are always fighting and changing themselves for men who aren’t doing the same for them. He states “a little piece of me dies” whenever women have apparently written to him about this, and I want to think his pain is genuine.

However, I also think he really values being a champion for women a little too much because he then says, “it’s time for men to step up / or lose their women to men like me / i can’t imagine my lady dealing with / some of the bullshit i see / on social media, tv, or in the real world.” The poem ends with him declaring how women shouldn’t have to give incentives to men in order to be treated decently, which, true, but who is this message really for?

Is it to help women, for them to know that the male poet recognizes their struggles and is in their corner?

Or is it to make the poet feel good because he’s “not like those other men”?

I truly want to believe it’s the first option, but I’m too wary of men to just blindly accept that. I’m too aware of my intuition to disregard how…off some of his poems made me feel, not about the subject matter itself but about the poet’s motivations and intentions for writing it.

There are some good finds here, but you have to wade through a lot to find them. I often had to stop reading, not because I was letting the poems sink in, but because I was reading too many that dealt with the same messages and subjects without any great deviation with the language he used. At the end of the day, very few if any have stuck with me. I won’t carry these poems around like I do “Invictus” by William Earnest Henley or “A Poison Tree” by William Blake.

Planting Gardens in Graves hasn’t totally turned me off from Sin’s other works nor from contemporary free verse as a whole. I do want to give another of his volumes a try, and I want to read these types of poems from a few female poets like Amanda Lovelace and Rupi Kaur.

But I still very much need to be convinced. Are these works poetry, or are they sentences that look like poetry because someone hit enter a lot?