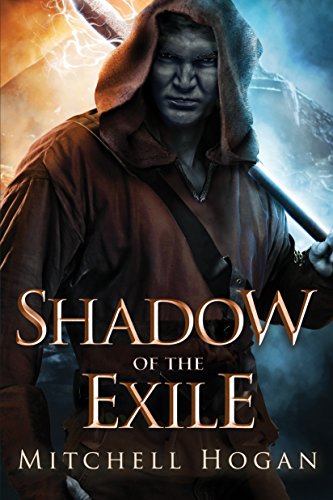 Thank you to NetGalley and the publisher for providing this ARC of Shadow of the Exile by Mitchell Hogan in exchange for an honest review. And sorry this wasn’t sooner!

Tarrik Nal-Valim, a demon of the 37th order, is summoned from his exile in the Abyssal Realms to human lands by sorceress Serenity “Ren” Branwen. Ren is the daughter of Tarrik’s former master, who he’d come to trust, but now it appears he revealed all of Tarrik’s secrets for his daughter to enslave him once again to do her bidding. Ren instantly commands Tarrik to protect her from her enemies, while keeping her own goals shrouded in secrecy.

Tarrik hates Ren for enslaving him and vows to get free of her bindings as soon as he can, but his urgency grows when he discovers she’s part of the Nine, a group of deranged sorcerers who have been broken and compelled to free the worst and most powerful demon who ever lived, Samal. If Samal is freed, the human realm will be wiped out and the Abyssal Realms enslaved to his will, and Tarrik finds himself facing increasingly difficult choices, especially when Ren’s path appears to deviate from this goal.

When I started this book, I admit I had some particular expectations for it. A powerful monster enslaved to do a human woman’s bidding? That’s got Hellsing and The Hundred Thousand Kingdoms written all over it. Instantly, though, I realized the relationship between Tarrik and Ren would not be like that of Alucard and Integra, or even Yeine and Nahadoth. There would not be struggles for one to obtain power from the other, their interactions ripe with sexual tension from the start. So I adjusted my expectations, excited for this new type of relationship.

Unfortunately, though, I quickly became bored, and I soon realized this book just wasn’t for me. While Tarrik was a strong-willed character, he was almost mostly ineffective compared to Ren’s power; I kept wondering why someone as strong as she clearly is needed Tarrik. I wondered why, as a demon, Tarrik wasn’t more interesting, more creative as a character.

He read more like an incredibly honorable human man who wouldn’t shy away at getting his hands dirty if the situation called for it—which was the point, I suppose, and the cause for his exile: being a demon who possessed humanity. But that’s not what I’m after when I read about a demon character.

I also didn’t see anything particularly demonic about Tarrik, other than his skin color, eating habits, and the slight supernatural power he possessed. Normally, these things could easily be considered demon traits, but Tarrik ran into quite a few humans capable of these things, too, which made him seem incredibly ordinary in comparison.

As for Ren, I liked her, but she was also incredibly difficult to get to know, even from a reader’s standpoint. She was distant, assertive, and cagey to Tarrik, and even when her goal became obvious to me, she refused to shed any light on it for Tarrik’s sake until close to the very end of the novel. I enjoyed her abilities, her rare shows of humor, her vulnerable side, and her determination; that’s probably why I’m as dissatisfied with the ending as I am.

While the worldbuilding and fearsome creatures that Hogan created were fascinating, a lot of the backstory of places and characters was told through exposition, particular facets of both Tarrik’s and Ren’s pasts. I came to wish that their respective backstories were the focus of the novel instead of the plot I was given, because they sounded more intriguing, more natural. I felt this keenly with the way Tarrik went on about his dead human wife, the one he’d gotten exiled by his own kind for, as well as Ren’s torments under Samal’s influence.

Otherwise, the novel consisted of a lot of rapid traveling as Ren and Tarrik flew from place to place. Even though the events that occurred at each place were different, the rhythm of it became very repetitive to read and eventually Ren’s goals at each of these places felt that way, too.

Tarrik’s fleeting on-and-off attraction to Ren despite his hatred of her was also not the best I’ve read, making the time when his feelings for her changed less poignant than it should have been. Part of me still roots for the both of them; I think their relationship—be it friendship or romantic in nature—could be enjoyable to read if handled a little better.

Despite this, I can see many people enjoying this book for the epic fantasy romp that it is. The prose and writing style is also very good. It just didn’t scratch a particular itch that I have, and I kept expecting elements from it that I never received, making the reading experience less enjoyable for me. However, I’m still thankful for giving it a shot.

If you’ve read Shadow of the Exile, what did you think of it? Let me know because I’d love to commiserate with you about what you liked and didn’t like!

One thought on “Book Review: Shadow of the Exile”