Hey, everybody! Recently, I saw a trend on Twitter going around, asking people what books were “their brand.” In other words, what books represent you—body, heart, mind, and soul? It’s more than asking what books you’d bring with you on a deserted island, but rather what books you carry with you always because they speak to every fiber of your being.

Plus, I think it’s a great way to get to know other readers and what their interests are.

I’ll be tagging some folks to do this, but if you like this post and want to do your own, please feel free and tag me with your answers! You can also do however many books you want. The Twitter post originally called for five, but I had to do ten, you feel me?

So what books are #MyBrand?

The Wicked King by Holly Black checks all my boxes. It’s political, it’s treacherous, the reader nor the main character Jude knows who to trust. Jude is the type of lead I love reading about. She’s strategic and merciless; she knows how to think and act like her enemies but is also hiding countless vulnerabilities. Her love/hate relationship with Cardan is one of the best I’ve ever read. What makes the relationships here truly great are the world building and the characters themselves. From Madoc to even Taryn, I love watching these characters and seeing what they’re going to do next. Plus, Black ensures that the true nature of the fey is always on display (the same being true with The Cruel Prince), making this world both one I long to visit but also dread at being caught in, defenseless. 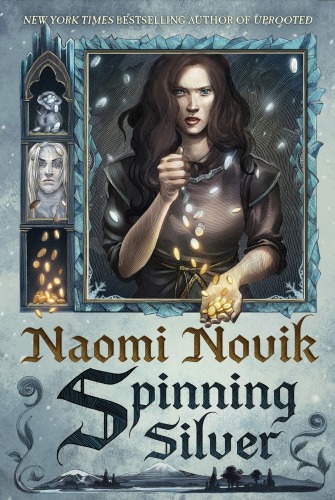 Spinning Silver by Naomi Novik overwhelms me with how much it completes me. I got not one, but three incredible female leads: Miryem, a Jewish moneylender who refuses to let her family be taken advantage of; Irina, a duke’s daughter who’s so often used as a pawn but is now demanding power from her fiancé, the selfish tsar; and Wanda, a peasant who isn’t the brightest but has enough love and determination to make the biggest difference. Place these characters in a story involving a Staryk king of winter, a power-hungry fire demon, the ability to turn silver into gold, and gorgeous writing throughout, and you have one of the best modern fairytales out there. Besides, regardless of my lust for the Staryk and the tsar, I could watch Miryem and Irina outwit them both all day. 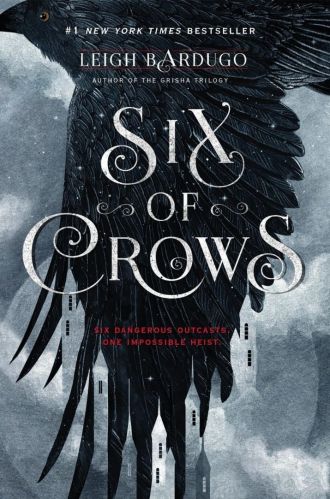 Six of Crows didn’t invent the ensemble, DnD cast by any means, but it’s definitely one of the few books—YA or otherwise—that employs it brilliantly on paper. Bardugo brings her strong prose from the Grisha trilogy that made me like them despite their first series flaws and raises her character game here. I love Wylan, Jesper, Nina, Matthias, Inej, and Kaz—all their diversity, all their individual strengths and weaknesses, all their interpersonal relationships with each other. While I love Kaz and Inej the most out of all the characters and ships, Bardugo has done what no other author has managed: made me invested in her other ships, each of them remarkably different. Plus, that dialogue is fire, and there’s crime gangs, and political tensions between countries, and a killer heist! One word: perfection.

Anyone else out there a slut for Labyrinth and Jareth? Wintersong isn’t quite a published Jareth/Sarah fanfiction, but the inspirations from the film are clear and appreciated. S. Jae-Jones takes the Goblin King premise I adore and transforms it into something grander and hauntingly beautiful. The imagery and prose in this book is unreal in its majesty, the words as dark and lyrical as Liesl’s own desires and her pursuit of music, her true self, and the Goblin King. If Sarah’s interactions with Jareth symbolize her sexual awakening, then Liesl’s journey with the Goblin King is a moment of utter transcendence. Wintersong is immersive, a spell that’s easy to get swept away in, which makes it such a perfect experience for me. That, and Jae-Jones gave me the dark, villain romance I craved and did not pull her punches. She did not soften up her villain to make him more palatable to the “moral purity” crowd but rather embraced his conflicting dual nature as both cruel, devious immortal and a lost, powerless human doomed to fate. Now, that’s the good stuff!

Whatever brand of adult romance/fantasy Pestilence by Laura Thalassa is, this is what I’m subscribed to. Not the half-baked adult urban fantasy stuff, not the bland paranormal romance with ~alpha males~, this! First of all, Sarah Burns is a great, everyday protagonist: a firefighter who’s just trying to make it through the apocalypse. She’s not a Chosen One, she’s not Super Special. She’s just doing her best. I love her because she’s practical, she’s smart, she tries to do the right thing, and she’s honest. And… She also tries to kill Pestilence, one of the Four Horsemen of the Apocalypse, and tragically fails. What starts then is a gripping whirlwind of a dark, villain romance and an exploration of morality and what it means to be human. Pestilence is not just an immortal, but one who truly has no grasp or love for humanity—and he is truly vengeful toward Sarah for trying to kill him and not showing him mercy. Once again, a problematic love interest that isn’t watered down because the author feared her own narrative. Instead, Thalassa allows these characters to go through this arc together; the pacing is great, the content is better, and I couldn’t be happier.

I love historical fiction and I love magical realism, but it’s so rare to find these two together in the perfect balance. Too often, I read books almost oversaturated with magical realism, the prose so bloated and flowery that half the time the reader has no idea what’s actually going on, and that can take away from an experience that’s grounded in reality or historical events. But Yangsze Choo did it! She found the balance! The Ghost Bride appeals to the side of me that craves historical fiction outside of the white, Western lens while also bringing that wonderful touch of magic. Ghost brides, the Chinese afterlife, spirits, and a certain very hot, magical investigator were all grounded in the rich backdrop of colonial Malaysia. I’m sighing dreamily just thinking about it.

Ah, yes, the only Sarah J. Maas book I claim and acknowledge! A Court of Thorns and Roses achieves what a lot of these other books do. There’s great world building with the human lands and the fae land of Prythian. There’s a human character, Feyre, who has to stand against all these powerful immortals and prove that mortals are capable of more than they ever expected. There’s also a mystery involving a curse on the High Lord of Spring, Tamlin, making this a wonderful Beauty and the Beast retelling, which I’m always weak for. Lucien, too, elevates the book by his sheer presence alone, and the fae elements were front and center with events like Fire Night, the Summer Solstice, and Amarantha’s court and subsequent, lopsided bargains. This was where Rhysand was at his peak and prime, acting as a seductive villain whose true motives and goals were unknown, who commanded the fearsome and mysterious Night Court. So often, I catch myself imagining how this world and these characters, including the other High Lords, were going to be developed before Maas completely destroyed everything that made them interesting with her poor follow-ups. But as the standalone I’ve decided it is, ACOTAR is still 100% #MyBrand, damn the rest.

In Claudia Gray’s Defy the Stars, Earth is the enemy, seeking war with other human-livable planets to colonize them because Earth ain’t doing so hot to live on right now. I dig that as it is, but then Earth starts waging war using mechs, and I’m forever sold. Robots are great, and robots that can look human are great. But have one robot in particular start to learn things like empathy and morality, and I am forever on board for this conflict and drama you’re about to give me. Throw in Noemi Vidal, a Latinx soldier fighting to defend her planet, Genesis, who then has to work with said mech against both their will to save all she loves, and I am cheering with glee. Seriously, how many of my favorite tropes did this one give me? Let’s see: Bodyguard trope, enemies-to-lovers trope, robot having to obey humans because of its programming and despite the orders harming its original objective to protect Earth trope. Okay, maybe that last one isn’t a trope, but man, am I here for it! Despite how much I love the ship between Abel/Noemi, though, that’s hardly the bulk of the book. Rather, everything is gradual and well thought out, the characters strong, and the plot and the questions it poses super relevant to today’s current issues. Thanks, Gray, for that sweet, sweet commentary.

With Illuminae, Amie Kaufman and Jay Kristoff jumped me in the parking lot of Denny’s, stole my peace of mind, and held my sense of safety for ransom at knifepoint–and I thank them profusely for doing so. I had no idea this book was this amazing and intense, so my dear authors, thanks for raising the sci-fi bar up to an unbelievably high level from now on. Illuminae took all my fears about space and made me face them head-on in an adrenaline rush of pure survival. Watching Kady Grant somehow navigate through this landmine of disasters left me in breathless awe, and the book itself broke down some preconceptions I had about the best way to tell stories. Its format is one of the coolest, most interesting I’ve ever been exposed to and made a noticeable impact to certain story events. Besides that… Have I ever told you guys I have a thing for psychopathic AIs? Here’s to you, AIDAN, you gloriously horrifying bastard, you.

Last but not least, we have another Naomi Novik creation: Uprooted, also a modern fairytale masterpiece in its own right. Since this was my first exposure to Novik’s writing, its density took some getting used to, but I soon became hooked. Agnieszka is a gem, a stunning emerald that just needed some polishing. I’m also shamelessly in love with the Dragon, not just because he’s a character type I naturally enjoy, but also because if Starscream were a human wizard, well… There he is, there you go. (Am I talking about Transformers right now? Yep, I am, let it go.) The magic system in Uprooted is a fascinating but also terrifying one, and the oppressive Wood that serves as the antagonistic force began my obsessive with creepy, magical woods that I didn’t know I had inside me. While the writing is just as lovely and vivid as it is in Spinning Silver, what has stayed with me the most is how, in the end, Agnieszka chooses herself. And that’s all I’ll say about that.

I couldn’t bear to complete this list without a few honorable mentions, so here they are:

Outbound Flight by Timothy Zahn, Angelfall by Susan Ee, Howl’s Moving Castle by Diana Wynne Jones, and If We Were Villains by M.L. Rio.

So what’s my brand? Let’s see:

For this meme, I’m tagging dearjenna, A Book. A Thought., LitLens, I like it sparkly, Aurora Librialis, JaneReads, The Critiquing Chemist, and anyone else who wants to do this one. I now pose the question to each of you…

What books are your brand?