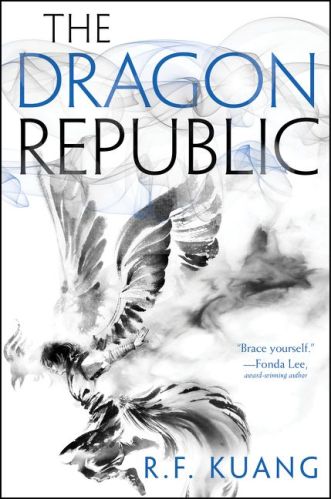 Thank you, NetGalley and the publisher, for offering this ARC in exchange for an honest review.

Just like last year with her eye-opening, debut novel The Poppy War, R.F. Kuang has crafted a brutal, god-touched, and war-torn narrative with its sequel, The Dragon Republic.

So as to not spoil the first book, here’s this for the summary: Rin is looking for purpose after the actions she took to end the Third Poppy War, and the Phoenix, the vengeful god in her head granting her incredible incendiary powers, seems determined to drive her insane. Fortunately, revenge is still on Rin’s mind, so she sets her sights on destroying Nikara’s traitorous Empress. On the run, addicted to opium, and with few allies, Rin has little choice but to join the Dragon Warlord as he attempts a coup on the Empire, but is his vision for a democratic republic sincere or a smokescreen for ulterior motives?

Rin is still one of the messiest, most raw protagonists I’ve seen in a long time, and I utterly love her. Even more, I love Kuang for being brave enough to craft a female main character who is terrible and emotional and understandable, who will do whatever it takes to protect her country, even if it means committing atrocities. Even if it means running from the guilt and trying to pin the blame on someone else.

Rin’s journey to accept her role in the events of The Poppy War features heavily here in The Dragon Republic, and I’m glad we see her trying so many things to cope with her actions. Opium. Inaction. Choosing to follow someone else’s orders. Being someone else’s weapon. Rin comes close to giving up her own agency if it means she cannot be blamed for the power she wields, and this is a struggle we see people wrestle with all the time.

We all like making excuses for ourselves. We all like making exceptions of ourselves. It can take someone a long time with a lot of lessons learned the hard way to begin to accept responsibility, not just for past actions but for actions they will commit in the future. We see this portion of that journey with Rin, which was completely necessary given how the last book ended, and it is a hard and painful one, as it should be. How can you still be human if you don’t truly regret your horrible actions towards other humans?Was their own lack of humanity justification enough? Or is the fact that you’re still attempting to reconcile your humanity with your own ruthlessness proof that you are tragically, terribly human no matter what? Is anyone ever really innocent? These questions and more face Rin but also us, and the social commentary does not stop there. Be prepared to delve into racial issues that might start to look uncomfortably familiar.

Luckily at the end of the day, Rin is still Rin, however. No matter how much she tries to surrender, she’s too angry to do so completely. She’s too opinionated and loves her freedom too much. There’s a reason the Phoenix chose her, and seeing her true nature at war with this “I just want to be used” mindset is entertaining, to say the least. Rin owns her power, and she’s learning to accept her own consequences, nobody else’s.

Needless to say, Rin continues to be one of my favorites, and it really hits home how young she actually is, barely an adult, really. That’s true for most of the characters, but the fact that it’s so easy to forget is a testament to how masterfully Kuang has written her narrative around war and how it utterly destroys anything approaching childhood and innocence. This series is not one that hints at war and then glosses over or sensitizes it when you finally get there. From war strategies to war crimes, Kuang has done her research, and this is one of the greatest strengths about her books thus far.

That, and her magic system. The emphasis around shamanism, gods, and hallucinogens provides the trippy, cosmic encounters I came to love in The Poppy War, and those moments continue to be amazingly described and developed further with The Dragon Republic. The Empress, especially, and Nezha both brought surprises that have turned my understanding (and Rin’s) about shamanism on its head, and I cannot wait to see where the answers might lead in the next book.

Speaking of Nezha, let’s talk about him briefly.

Oh, Nezha. I hate you, but I love you, but I hate you. I think Rin sympathizes. At the end of the day, however, I cannot wait to see where his character arc is going. It has already been so nuts.

Kitay, however, continues to be Best Boy and my absolute favorite. I already love war strategists almost on principle, but there is such a joy that comes with Kitay whenever he’s on the page. I love him to pieces, and the friendship between he and Rin is next-level but also chaotic? Anything with Rin is chaotic, let’s be honest, but again, that’s part of why I love her.

I was so happy to see Venka again, but I dearly wish she’d had much more page time. I think the next book is going to be her time to shine—or at least, it better be.

Of course, members of the Cike and Feylen also stole the spotlight at various times. I want to say more about them all, but I don’t want to spoil anything. Seeing visions and memories of Altan also had me feeling some type of way. Namely, I realized how truly destructive of a force he was on Rin and how tightly bound she truly felt towards him. Obsession’s a hell of a thing, huh?

Other than the characters, the war narrative, and the shamanism, what The Dragon Republic also has in spades is politics. Personally, I find politics to be as fascinating as they are frustrating, and since I felt those very things while reading, that means Kuang did them exactly right. It’s not just the Nikara versus the Mugenese anymore, either. More players become introduced to this chessboard, including the Hysperians and the Ketreyids, and honestly? I need them all to go on somewhere and leave Nikan and my girl Rin alone. But in the meantime… I’m going to enjoy this utter train wreck, too. I can’t help it. I love political games like this.

Despite all this love that I have for The Dragon Republic, I couldn’t give it a full five stars for a few reasons. The first is that I was bummed that Rin got nerfed so soon into reading. I felt like I had just gotten excited about Rin finding the control and freedom she needed, and then it all got derailed. Fortunately, what results from her being nerfed totally pays off in the span of the book, but I couldn’t help but deflate from it. This choice for her character arc also made the middle drag a bit. As I was reading about war strategies and then watching them being carried out, I had to realize that, without the Phoenix, there wasn’t much for Rin to do. This was crucial for her to realize, too, and make contingency plans, but it lessened the reading experience.

The other thing was that all the political betrayals were a bit too obvious. Maybe they were supposed to be. Maybe it was supposed to be transparent to show how much Rin wanted to be manipulated, how much she wanted to follow other’s orders and needed to believe in something, even if it’s so clearly false—but it just wasn’t as riveting as I’d hoped it would be to read. While there were some twists I very much enjoyed, none of them compared to The Poppy War’s ending, but admittedly, that was going to be a nearly impossible follow-up.

Once again, the ending here was just crazy enough that I have no idea where we’re going or how far Kuang (or Rin) will go, and that’s as exciting as it is terrifying. (And yes, I’m still very much hurting.) At the conclusion of this trilogy, who will the real enemy be? What cause will Rin come to truly commit to? What’s going to happen to those still alive? What’s the full truth about the Trifecta, shamanism, and the gods as a whole?

Best believe, I’m fully strapped in, ready to find out!

One thought on “ARC Review: The Dragon Republic”